Members of the Society will be saddened to learn of the death of Sir John Laws on Palm Sunday. After a prolonged period of ill-health, 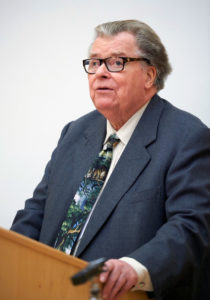 he was admitted to hospital and subsequently tested positive for coronavirus. John was a long-serving member of the Editorial Board of the Ecclesiastical Law Journal and a frequent contributor of book reviews, always perceptive and occasionally trenchant. He was a key speaker at ELS conferences in Durham in 2003 and again in Trinity Hall, Cambridge, in 2017.  On each occasion, he was accompanied by his wife Sophie, to whom he was devoted and who predeceased him in 2017. She was well known to many clerical members of the Society from her time teaching theology at King’s College, London.

After a successful career at the Bar, including more than a decade as First Junior Treasury Counsel (Common Law) – or ‘Treasury Devil’ – advising and representing the Government in many high-profile cases, John was appointed to the High Court Bench in 1992 and subsequently promoted to the Court of Appeal. On his retirement from the Bench in 2016, John was elected Goodhart Visiting Professor of Legal Science at the University of Cambridge. His extra-judicial writing, which was considerable, largely focused on issues of public law and democracy.

John was the most gregarious of men, with a quick and lively wit who enjoyed life in all its richness. He was always encouraging of young practitioners, not least during his tenure as Treasurer of the Honorable Society of the Inner Temple in 2010. A loyal and generous friend, he will be remembered for his love of Greece and of cats. Our thoughts are with his daughter, Margaret Grace, her husband and their two children, particularly at this difficult time of social isolation.

May he rest In peace and rise in glory.