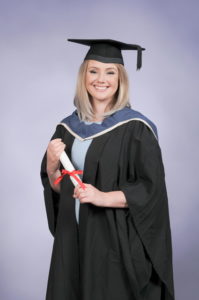 The Eric Kemp Prize for 2019 has been awarded to Georgina Coles, a final year student from Oxford Brookes University.

The Ecclesiastical Law Society awards the prize on any university degree course which contains a significant element relating to ecclesiastical law, to the student producing the best performance in the subject for the year. From 2010, these prizes have been named in honour of the Rt Revd Dr Eric Kemp (1915 – 2009), Bishop of Chichester and a distinguished canon lawyer, who was the first President of the Society.

Georgine Coles summarized the subject of her dissertation as follows:

My work explored whether a multicultural state should reflect its religious history through the use of ceremonial deism. Essentially it explored the First Amendment/Supreme Court judgements within the United States Jurisdiction and considered the impact this would have on those who do not fall within ‘the reasonable person’ particularly religious minorities and nonbelievers. Then, it contrasted the US jurisdiction to the European attitudes towards a multicultural states religious endorsement and religious freedom in general. In short, it concluded that the application of the Establishment Clause’s Ceremonial Deisms is incoherent, unworkable and unpredictable. It undermines the concept of state neutrality towards religions, although it is often defended on those grounds. Its application cannot be rigidly enforced without damaging to the multicultural population of that State. The use of the reasonable person, who appears to represent the reasonable Christian does not effectively protect individuals who fall outside of the Judeo-Christian population. The use of Ceremonial Deism only serves as a way of reinforcing the notion of insiders and outsiders of a multicultural state.