For the third successive year, the Ecclesiastical Law Society has sponsored the Inter-Inn Mooting. This year’s final, hosted by Inner Temple who won the competition last year, took place on Thursday 6 July 2017. The finalists were Gray’s Inn (Ben Norton and Kyra Nezami) representing the Appellants and Lincoln’s Inn (Calypso Blaj and Veena Srirangam) for the Respondents. The problem had been set by David Harte and concerned an appeal from the Administrative Court in a claim for judicial review of a school’s refusal to allow a Christian pupil to wear a head scarf in solidarity with Muslim students. The judges, who generously volunteered to hear the Moot, were Mr Justice Goss, HHJ Pelling QC, Upper Tribunal Vice-President Mark Ockelton and Ian Croxford QC.

Giving the judgment of the court, Goss J dismissed the appeal. He commended the quality of all four of the mooters, but by a narrow margin Lincoln’s Inn were declared the winners. They were presented with the Inter-Inn Mooting Shield together with an individual glass trophy. Mark Hill QC, chairman of the Ecclesiastical Law Society, then gave a cheque to the winners. Lincoln’s Inn will now host the competition in 2018. 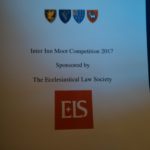 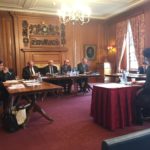 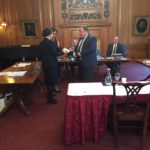 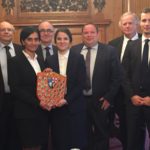 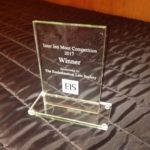