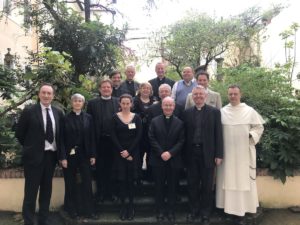 The Colloquium of Anglican and Roman Catholic Canon Lawyers met at the Venerable English College, Rome, 10-12 April 2019, thanks to the generous hospitality of the Rector, Mgr Philip Whitmore. The subject of this year’s Colloquium was “The Law of Liturgy,” convened by Prof Norman Doe, Fr Robert Ombres OP, and Prof Mark Hill QC.

On each topic a paper was presented by the Anglican team and by the Roman Catholic team, with discussion following: 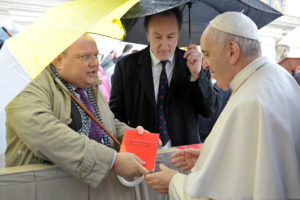 As always the Colloquium revealed both commonalities and differences between the two churches’ canonical traditions. It is hoped a fuller report of the Colloquium proceedings may be published in a future edition of the Ecclesiastical Law Journal. As the photograph shown right indicates, the journal is reaching a wide readership!

In addition to the papers mentioned above, Mgr Philip Whitmore addressed the group on the subject of Liturgical Formation in Seminaries.

The Colloquium was very glad to be visited by the Revd Canon Anthony Currer from the Pontifical Council for Promoting Christian Unity, the Co-Secretary of ARCIC. He discussed the new paragraphs citing the importance of canon law in ecumenical sharing, present in the new ARCIC document “Walking together on the Way,” and how the Colloquium might usefully feed back into ARCIC’s work. 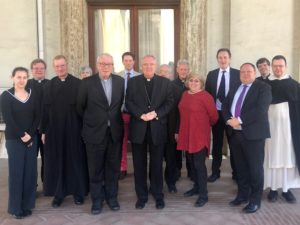 The Colloquium also visited The Congregation for Divine Worship and the Discipline of the Sacraments. Archbishop Arthur Roche spoke to the group about the Congregation’s work, and helped to illuminate our discussions of the relationship between liturgical abuses and lawful customs, the purposes of liturgical law, and its enforcement. Also present at the Congregation was Mgr Brian Ferme, prelate secretary of the Council for the Economy and a former participant in the Colloquium, who was able to explain some of the financial aspects of the Holy See’s work.