The Society was well represented at the recent meeting in Geneva of the Christian Law Panel of Experts and the Revd Dr Odair Pedroso Mateus, Director of the World Council of Churches Commission on Faith and Order. Readers of the Ecclesiastical Law Journal will be familiar with the work of the Panel of Experts, which was established in November 2013 at an invited Symposium at the Venerable English College in Rome during the Chairman’s tenure as Ecumenical Fellow in Canon Law. A summary of the work of the Panel, together with the Principles of Christian Law which the panel drafted in the course of a series of subsequent meetings, was published at (2017) 19 Ecc LJ 138-155

Drawing on the work of Norman Doe, Christian Law: Contemporary Principles (2013), the Panel had examined how Christian traditions, through their regulatory instruments, evidence common principles which have a strong theological content and are fundamental to ecclesiological self-understanding. In 2015, the Panel submitted a juridical response to the Faith and Order Commission Paper, The Church: Towards a Common Vision. 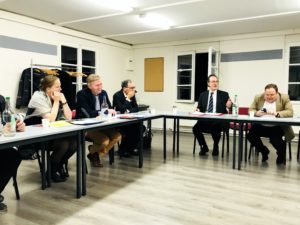 The meeting in Geneva allowed the Panel to present to the Commission its completed version of its Principles of Christian Law. These were received with thanks by Dr Mateus, who outlined the history of the ecumenical movement leading to Common Vision. He commented on the distinct last of comparative canon law in ecumenical dialogue thus far. Dr Ani Ghazaryan Drissi of the Commission added that the Panel of Experts’ response had been the first received following and that it was ‘unique’, identifying a ‘fresh path’.

It will be further considered at meetings in January 2018 and then by the full Commission in 2019.Dr Mateus proposed an informal partnership between the Panel of Experts and the Faith and Order Commission as a means to carry forward this ongoing project. The Panel next convenes in Oxford in May 2018 for a symposium aimed at producing a book commissioned by Cambridge University Press, Christianity and Juridical Ecumenism. It will meet again in Rome in November 2018 to review local initiatives in Sweden, the Netherlands and the United Kingdom which are currently at the planning stage. 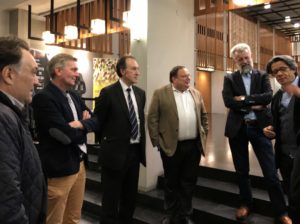