The Bekynton Lecture in Law and Religion: Wells Cathedral

The inaugural Bekynton Lecture was delivered by Professor Norman Doe, Director of the Centre for Law and Religion, Cardiff Law School, on Sunday 1 October 2017 in Wells Cathedral’s magnificent Education Room, off the Cloisters, built through funds raised by the Friends of the Cathedral. Over 80 people attended, including cathedral dignitaries and community members, Mark Hill QC, Chairman of the Ecclesiastical Law Society, Stephen Slack, Chief Legal Adviser to the Archbishops’ Council and General Synod of the Church of England, and Christopher Jones, Partner at Harris and Harris.
Professor Doe’s subject was the legal architecture of English cathedrals. The lecture was introduced by the Dean, the Very Revd John Davies, who spoke about the timeliness of the topic in light of the Archbishops’ working group on cathedral governance due to report to the Archbishops’ Council in December 2017. A deeply knowledgeable audience engaged in lively comments and questions, including input from the Very Revd Richard Lewis, former Dean of Wells (1990-2003), who had been a member of the Archbishops’ Commission on Cathedrals whose report Heritage and Renewal (1994) led to the enactment of the Cathedrals Measure 1999.
The lecture, followed by the book launch of N. Doe, The Legal Architecture of English Cathedrals (Routledge, 2017) and N. Doe, ed., Christianity and Natural Law (Cambridge University Press, 2017), is a collaboration between Wells Cathedral, Harris and Harris Solicitors, who sponsored the refreshments, and the Centre for Law and Religion at Cardiff University. Thomas Bekynton (1390-1465) worked in the fields of law and religion: he was a notable canon lawyer, Dean of the Court of Arches (1423), and Bishop of Bath and Wells (1443). 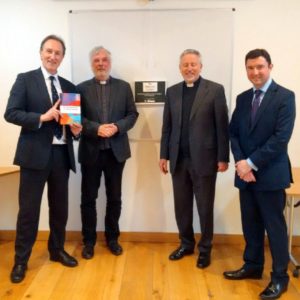